A tale by the Brother’s Grimm 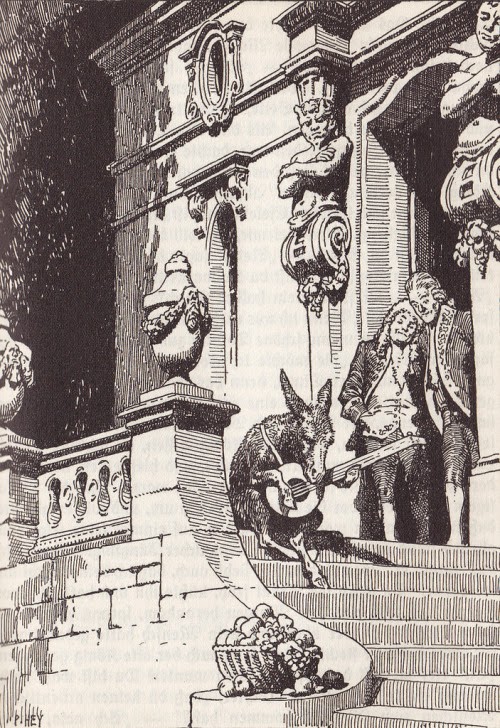 Once upon a time there was a king and a queen. They were happy, but they had one problem – they did not have a baby. The queen cried and cried.  One day she shouted out, “Please God, give me a baby!” To her surprise, she soon found out that she was pregnant. After nine months, the baby finally arrived.  For a moment, the queen and king were delighted, but when they saw the baby’s face, they had a huge surprise… The baby looked like an animal, a donkey.  The king and queen were shocked. The queen cried, “Oh no! My baby is a donkey! What trick has God played on me!”

The king and queen did not realize that the donkey was just a skin. It was possible to take off the donkey skin, but they didn’t want to touch the baby. Their precious baby stayed inside the donkey skin.

Time passed. The queen didn’t want to look at her child. She didn’t want to speak to him. The Donkey Prince was alone.  He consoled himself with music.  He could play the guitar beautifully and tried to make other people happy by playing for them.

From a distance, the king listened to the music, and it made him feel relaxed.  But the music made the queen very sad. She couldn’t stop crying.  The Donkey Prince had a gentle heart and he was sad for his mother.
One day, as he walked by a lake, the Donkey Prince saw his reflection. He was very sad to see that he looked like a donkey.  He said, “I am ugly. I am an embarrassment to my family. I have to leave the palace. Then, perhaps, my mother will stop crying.”

The prince left the palace immediately. He was all alone in the world. He had no money. He walked and walked with no particular destination. In the villages he passed through, the Donkey Prince was badly treated.  People shouted to him, “Get away from our village.  You’re a monster!” Some people even threw stones.

The Donkey Prince started to avoid other people.  He walked and walked. He was sad, so he played his guitar to console himself.

One day he passed a beautiful palace. The king heard the beautiful music that the Donkey Prince played.  He was very impressed.  He went outside to meet the musician and said, “How beautiful!  You are very talented. Come inside the palace and play for my family.”

“Your Majesty, I am ugly. I do not deserve an invitation to the palace,” said the Donkey Prince.

The king explained his problem. “My daughter, the Princess, is so sad. A friend of hers died recently. The Princess has a gentle heart. Your guitar will console her and make her happy again.”

Little by little, happiness returned to the palace. The Princess was no longer sad.  Her father was overjoyed.  The Princess loved the Donkey Prince.  One day, she touched his arm gently. She caressed him. The princess’s caress moved the Donkey Prince’s skin. It fell off and now there was a handsome prince standing in front of her. When the Princess saw his beautiful face, she cried… but not from sadness. The princess cried with joy!  She took the donkey skin and burned it. The Prince was happy, too. Finally, he was accepted by other people. Finally, he accepted himself.

The Prince and the Princess got married. The king was delighted. The prince returned home to meet his parents. When he saw his mother, she cried with joy, too. They all lived happily ever after.