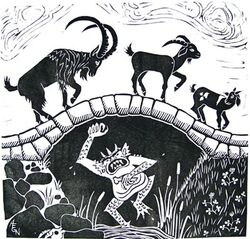 Once, there were three goats.
One goat was little. One goat was big. But one goat was huge!
The little goat said, “I want to eat. I want grass.  Grass is delicious! “
The big goat said, “There is no grass here.”
There was a small amount of grass left.  But there was a great deal of grass in the distance!

The little goat arrived at the bridge. TRIP TRAP TRIP TRAP. But there was a big problem!
On the bridge, there was a monster! The monster was huge! The terrible monster ate goats.

The monster thought about it. “Huh … huge? And delicious? Fantastic! I will eat your brother,” said the monster.  “Cross!”

Quickly, the big goat crossed the bridge. TRIP TRAP TRIP TRAP.  He arrived at the grass. Finally, he ate the delicious grass.

In two minutes, one final goat arrived.  But it was not a normal goat. It was HUGE!  He crossed the bridge with a huge TRIP! TRAP! TRIP! TRAP!  The bridge trembled! BOOM BOOM BOOM!