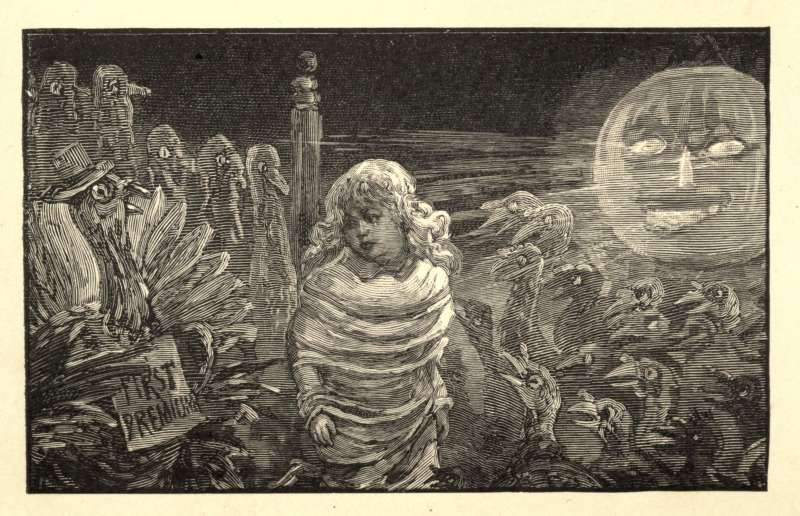 “Is this a true story?” said the little girl.

“Well, let’s begin. It was the night after Thanksgiving. The children spent all night at grandfather’s. The family all said it was the best Thanksgiving dinner ever. They had cranberry sauce, mashed potatoes, and corn. They had celery, squash, and tea and coffee both. There were breads and cakes: hot biscuits and pumpkin pie.”

“Okay, I’ll continue…They had lots of delicious food. They had everything on the table. The most delicious food of all was the turkey. It was enormous! It was as big as a giraffe.”

Papa continued:
“The turkey won at the county fair. It weighed 15 pounds—no 20! It was so heavy that the mothers and grandmother’s couldn’t put it on the table. The Papas had to help. The children saw this turkey and cried “YEAH!” They were so happy, they jumped up and down. It was magical.”

“Oh no,” said the little girl. “I would be happy…but I would not jump or cry. Were the moms mad?”

“Well, you see, they were just having fun. Plus, it was Thanksgiving,” said Papa. He finished the story: “Well, that night, everybody was fast asleep. One little girl was sleeping—”

“Yes, she was a very pretty, good little girl, like you. She was very respectful to her papa. She was in bed.  She closed her eyes and then she saw a colorful—”

“No, ma’am. It was a turkey’s ghost. It had a ribbon around its neck. It said “First Place Winner.”  It was the turkey they ate for dinner. It was a sad turkey. The girl saw the turkey before. “I know you,” said the girl. “You used to run very fast.”

“You ran too. You ran to catch me; you killed me!” cried the turkey.

Then the Turkey Ghost flapped its wings. Turkey Ghost said, “Come on, chick-chickledren!” Suddenly, there were 100 turkeys. They were all in a big circle in her room. The little girl was standing in the middle of the circle in her nightgown.

Suddenly, she couldn’t move. The turkeys had put a ribbon around her arms. “HA HA! The tables have turned,” said the Turkey Ghost. “You will pay for your crimes.”

The turkeys flapped their wings. The girl knew what “The tables have turned” meant. She had read that in a book at school. The teacher said that means the person who was in danger is now in charge. The turkey was on the table, but the turkeys were in charge now.

The turkeys kept pointing their wings at the Ghost Turkey. He was in charge of all the turkeys. The Ghost Turkey spoke, “People have been eating turkeys ever since the discovery of America. It must stop! It is time to pay back people for their crimes.”

The girl was pretty young, but she was as big as the Ghost Turkey. “You look delicious,” he said. “I have no doubt you will make a nice dinner.”

The little girl tried to tell him that she was not to blame. “I’m sorry, Mr. Turkey. I didn’t want to eat you. My mom cooked you. She told me to eat. I only ate a very, very little piece,” she said.

The little girl said, “I am very nice. I have never hurt anyone. Please don’t eat me. There is a big difference between eating people and eating turkeys.”

“What difference, I should like to know?” says the old Mama-turkey. She was pretty mad.

“People are smart. Turkeys are not,” said the little girl.

“How dare you!” cried the old Mama-turkey.

The poor little girl was so scared. She didn’t know what to say. All the little turkey chicks jumped up and down. The Mama-turkey flapped her wings. The Ghost Turkey spread his tail. “Eat her!” they cried.

Then, the Ghost Turkey spoke. He saw the girl was a little scared. “Dear friends,” he said to the Mama-turkey, and chick-chickledren, “Calm down. Perhaps you would say mean things if you were going to be eaten.”

And they all began to scream and to cry, “But we were eaten. We are nothing but turkey ghosts.”

But the Ghost Turkey could not calm them down. The turkeys acted like–turkeys. They were ridiculous. “Mama, can I have a drumstick?” said one little chick. “I want a wing, Ma!” (Though the little girl did not have any wings.)

“This is cruel,” said the little girl. “Yes, but people talked about it before they ate us,” said the Mama-turkey.

Well, First-Place Ghost Turkey tried to calm them again. But again, they acted like turkeys. “I am so sorry, my girl,” he said.

The little turkey chicks began to wipe their eyes on the backs of their wings.

The little girl began to think they would not eat her. Then, she saw the Mama-turkey and the turkey chicks make a circle. They talked to each other. She couldn’t hear them.

Then, the Ghost Turkey looked at the girl. He looked very serious. He said, “Do you promise? Do you promise you will not eat turkey?”

Then, the moon began to shine very bright. Soon it was the sun. The sunshine came through the window-curtains. Then, the little girl–”

“Woke up!” shouted the little girl. “There now, papa, what did I tell you? I knew it was a dream all along.”