English’s Docs ▸ Beginner ▸ The Fall of the House of Usher

The Fall of the House of Usher

A story by Edgar Allen Poe 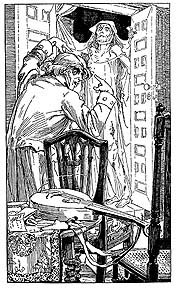 Roderick Usher is terrified! He invites his friend to visit him. He sends a letter.

I am terrified ! There are strange phenomena. I am sick. I suffer from great anxiety. Please come visit me. It’s urgent!

The friend reads the letter. Quickly, he goes to Roderick’s house. The house is old. There are cracks in all the walls. The house is made of stone and has Gothic architecture. It’s like a castle. It’s dark and sad. The friend is very nervous in this scary house.

The friend walks nervously through the house. Finally, he sees Roderick.

Roderick looks horrible! He is pale and fragile.  Roderick says, “My friend, I’m sick and terrified! My house is haunted!”

The friend says, “No, that’s impossible! The house is not haunted! Calm down.”

To calm Roderick, his friend plays the guitar. The music calms Roderick. Roderick turns to his friend and says, “Thanks for the music. Now, can you recite a poem? I love poems. “

His friend is very loyal. He smiles and said “yes.” The friend begins to read poems from a book of poetry. He reads romantic poems. He reads happy poems. In the final chapter, there are scary poems. He starts to read one final poem. It is called The Haunted Palace.

Roderick does not like this poem at all, and he says, “No! My house is haunted!”

The friend says, “No! Impossible ! It’s not haunted.”

Roderick insists, “Yes, yes, the house is haunted!” Then Roderick takes him to a secret room. Roderick said, “Here is my sister, Madeline Usher. “

The friend is immediately shocked. Madeline is a beautiful girl, but she is dead! Madeline is lying in a coffin. Her death was recent because Madeline is still beautiful and rosy. Roderick looks sadly at Madeline and repeats, “She’s dead! She is dead ! ”

The minutes pass in silence. After the shock, the friend says, “Calm down, Roderick.” To calm Roderick, he reads a story. It’s the story of an ancient castle. The friend reads:

At that exact moment, there is a horrible cry! Roderick is horrified and he says, “A monster – or a ghost!”

“Impossible. There’s no such thing as monsters or ghosts. It’s just an animal,” says the friend. He continues the story. He says :

“The dragon attacked the castle.”

BOOM! At that exact moment, Roderick’s house starts to shake. The walls shake and tremble. Then, there is a loud CRACK ! The cracks in the walls grow bigger!

Roderick screams in terror. But the friend says, “It’s a coincidence.” He continues the story. He says :

“Then, the dragon attacked the prince. “

At that exact moment, Roderick shouts: “A zombie! “The friend turns and sees Madeline. She is not in her coffin. Madeline attacks Roderick. Roderick shouts “NO! “And he falls dead.

The house shakes. CRACK! The cracks grow bigger along the walls! Suddenly, a wall falls. A second wall falls. Quickly, Roderick’s friend runs from the house! He runs a short distance and he turns. In the distance, he sees the house. The house falls down. It is in ruins. Madeline and Roderick are dead. That is the end of the house of Usher.