A story from the Brothers Grimm 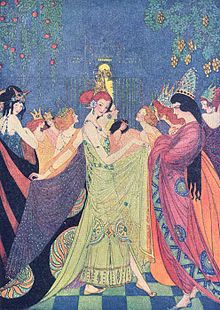 Once there were twelve beautiful princesses. They lived in a beautiful castle. They had a good father, the king. The king loved the princesses.

But the king was confused. Every night, the princesses went to bed. They said, “Good night.” The king locked the door.

Then, every morning, he went to the girls. He tried to wake up the girls. “Good morning! Wake up!” said the king. But the girls were too sleepy and they did not want to wake up.

Night after night, the girls went to bed. The king locked the door. He ordered guards to watch the door. The girls did not go out the door. But still, they were sleepy, and their shoes were dirty.

The king was very curious. He ordered more guards to watch the door. But no one saw the girls go out the door.

Finally, the king announced, “If someone finds out the princess’s secret, I will pay him a fortune! ”

Many people tried to find out the girl’s secret. They watched the door all night. But it was impossible. They could not find out the secret.

One day, a kind man arrived. He was very poor and he had only one piece of bread. “Please sir, I am hungry. Can I have some bread?” asked an old woman. The kind man was generous, so he gave the woman his bread.

“Thank you,” she said. “You were generous to me, and now, I will be generous with you.” The old woman gave the man a magic cloak. The cloak made people invisible.  She said, “Take the cloak. Go to the castle, and find the princess’s secret Then, you will be rich,” said the woman.

So the man went to the castle.  There, the man said, “Majesty, I have a way to find the girl’s secret. I have a magic cloak. With the cloak, I can watch the princesses, but they cannot see me. Then, I can find out their secret.”

The king was very happy, and he took the man to the princesses. But they could not see him. He was completely invisible. “Good night, my girls,” said the king. Then, he locked the door.

“HA HA! Now, we can go!” said the girls. They put on beautiful dresses and beautiful shoes. Then, a magic door appeared. It was an invisible door. The girls went through the door to a magical castle.  The man with the invisible cloak went to the magic castle, too.

At the castle there were twelve princes. The princesses loved the princes. They danced and danced all night. They were very happy. The man with the cloak was happy, too. He saw the girls’ secret.

That morning, the king arrived at the door. “Good morning, girls!” he said. “And good morning, sir.” At that moment – POOF! – the poor man appeared. He took off the cloak.

The man told the king what he had seen. The king was very happy and gave the man a fortune! He gave him chests with diamonds, rubies, and gold. But the kind man went back to the village. He found the old woman. He gave her gold and diamonds. “Thank you,” he said. “You were generous to me, and now, I will be generous with you.”